Modern cameras are absolute marvels at what they can do and how well they do it. Even with much abuse they produce pictures that are almost flawless. There are limits and little problems that will reveal themselves on close examination. This article explores some of those.

If you can remove the lens from your camera, it is almost certain that a little bit of dust will sneak in before you can cap it or install another lens. Such a speck of dust can settle on the sides, the mirror in a DSLR, or on the image sensor. Well, not exactly the sensor, that has usually some optical items stacked on it. If a speck settles on the filter in front of the sensor it will imped the light falling on a small number of the imaging pixels. You can see such specks in photos as “dust bunnies”. Before I go on, let me show you an example, a fairly drastic one I might add: 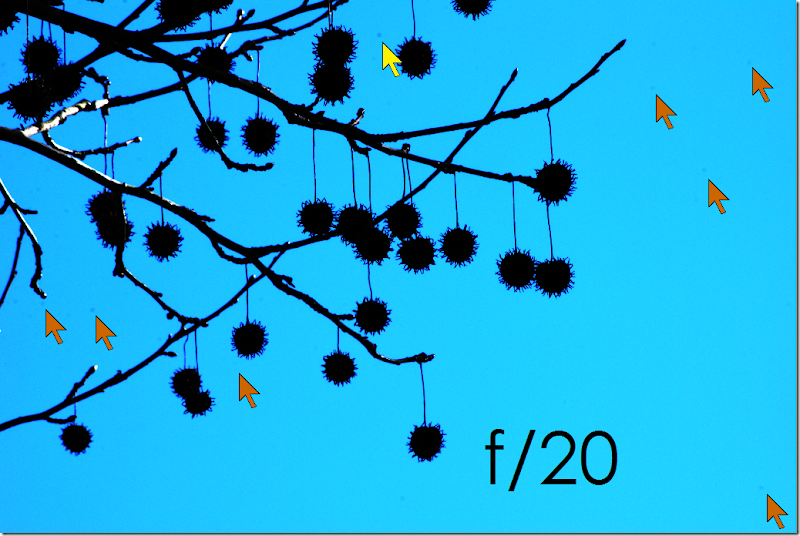 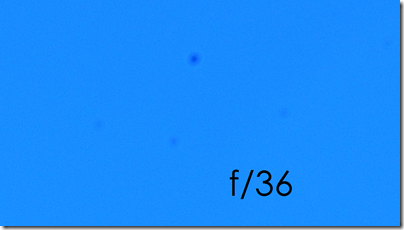 The smaller the aperture, larger the f-number, the more noticeable will be the dust on the sensor. In fact at wide apertures and even mid-range (f/8 to f/11) the beam of light reaching any pixel is wide enough that a little bit of dust wont show. So it is a problem only when shooting at small apertures, for example in landscape photography when you want everything sharp from the foreground to the far mountains, when you want a really wide depth of field and thus choose a small aperture like f/22.

So, what can be done?

Obviously you will want to keep your camera as clean as possible. Always point the camera opening down when removing the lens – better to let dirt fall out than in.

Your camera most likely has a couple of tools for fighting dust bunnies. Most cameras have a dust-off feature. A bit of ultrasonic vibration is applied to the filter to shake any dust loose and have it, hopefully, fall to the bottom. There might be a surface there designed to be sticky to dust so it gets trapped. The camera can usually be set to perform this function regularly when you turn it on or off. This is like a dog shaking itself dry, but not nearly as vigorous, and hence not nearly as effective.

The second tool in your camera admits that some dirt may remain firmly stuck to the sensor. It lets you take a “dust reference photo”. Nikon calls it “dust off ref photo”. Check you camera manual to see how to record such a frame. The idea is to use this reference photo and subtract the spots in processing in your computer. Again Nikon has such a tool built into its Capture NX software (extra cost item), other manufacturers provide similar tools.

You can clean your camera sensor. That is a very delicate operation. First you need a clean room to do this in, and appropriate tools. Just like having a scalpel does not make you a brain surgeon, having a sensor cleaning kit does not impart the proper skills for operating on your camera. This task is best left to professionals. Your friendly camera store likely offers this service along with other camera maintenance services. A cleaned camera sensor will stay clean until you remove the lens – which like would be the very next day. So I have this service performed only when I want something else done to the camera.

Lastly there is the practical approach. Accept the fact that the world is not perfect. Inspect your photos – especially those that you will proudly show off to friends and strangers – and use the retouch tool, or healing brush, in your post-processing software to edit out any spots.

Dirt on the lens

The front element of your camera lens is exposed to the environment and dirt, even fingerprints, can easily get on it. With interchangeable lenses the back element can 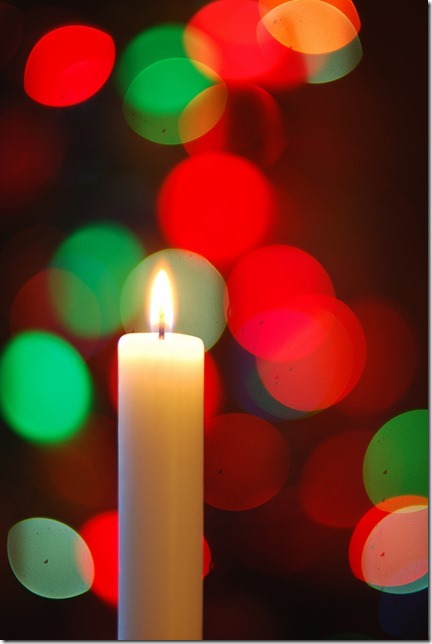 also pick up dirt. Is that a problem? Most of the time not at all. The little bit of light blocked by even a fairly sizable spot will not affect the photo. There are conditions, however, under which dirt on the lens will show in photos and be very bothersome. Let me show you such an example.

The photo here shows a candle with a number of very much out-of-focus lights in the background. Some of these light patches are very sharply defined and you can see spots in them. Those little black spots come from dirt on the lens. You would definitely notice dirt of that size by looking at your lens. I am confident that you would take your lens cleaning brush and dust it off.

So what is this rare circumstance when dirt will show and why does it not show for all the out-of-focus light patches in this photo?

Dirt on the lens will show when the bundle of light coming from the lens is intercepted so it will be imaged as a large circle and when that light comes from a very small source, In the case of the photo here, some of the lights were pin-point small lights – LEDs. The patches not showing the dirt were made by larger lights. Essentially point sources are required to show up this problem.

What can you do? Clean your lens. Be very careful doing that, your lens has thin layers of anti-reflection coatings. You do not want to scratch those.  Follow the instructions in your manual.

If you are bothered by the fact that some of the bokeh patches, that’s what they are called, are not round but rather boat-shaped, hold your question for a discussion of optics. We won’t get into that in this article.

Your camera sensor has millions of individual light sensors, “pixels”. As with all electronic devices some of those tiny sensors may go bad. Having a few non-functioning pixels is not a serious problem and you may not even notice them. A non-functioning pixel might be stuck off and not provide any signal. That would  result in a black spot. A black spot would go unnoticed in almost all photos.  It could also be stuck on and produce a full output signal. That would show as a tiny white spot. We are sensitive to spots of light and a stuck on pixel is much more noticeable. 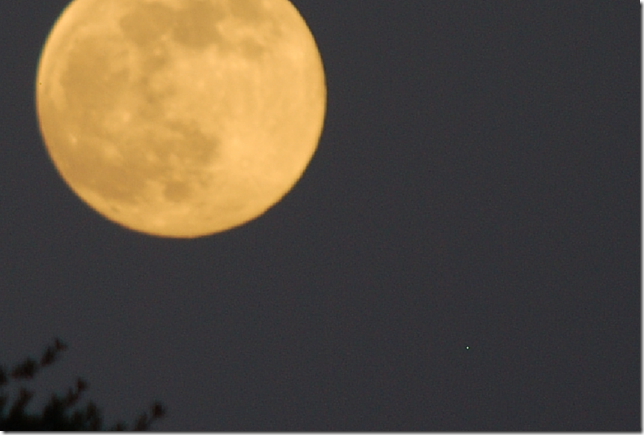 Now just one pixel would seem that it should not be of any concern at all, but there is more to the story. In order to produce color photographs, the sensors in the camera are equipped with color filters. Really tiny filters, some pixels have green, others blue, and others red filters. The pixels with their various filters are arranged in patterns. Rather than provide images made up of red, green and blue little patches, cameras provide three color signals for every pixel. That increases the apparent resolution and goes back to the early days of digital cameras when sensors had only thousands of pixels rather than millions as they do today. To produce the color information for each pixel the computer in the camera looks at the signals from adjoining pixels and calculates what the missing two colors should be. Why this lecture on minutiae? Because a stuck pixel will not show up as a single pixel but rather a patch since it affects what is calculated for adjoining pixels.

The photo here shows an evening scene with the moon and a star. Well, that star, so nice and sharp in this picture, is a stuck pixel rearing its little head.

Let’s take a closer look at that “star”. 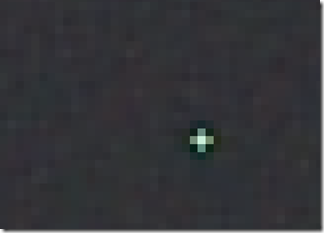 You can see that at least an area of nine pixels is affected. In the actual file data an even larger number can be identified as different from the surrounding area.

Stuck pixels are permanent defects that may be affected by various environmental conditions including sensor temperature. They will tend to be more noticeable in long exposure photos because for those the sensor is operating for a longer period of time and getting warmer is it does its job.

Here again a reference exposure can be used to eliminate the artifacts in post-processing. If you are into astronomical photography you will definitely want to do that.

For the rest of us a stuck pixel will go unnoticed in most photos. If it shows up in a contrasting area, it can be easily touched up in post-processing. There are not likely to be many of those in your camera.

Well, I hope you have gained some useful information from my story on dust bunnies, lens dirt, and stuck pixels. Now I have to go and see if I can get my dirtied-up camera clean again. Ah, the things we do for our readers!